Rachel and Nick attending a class in Barrow upon Soar in November, here Rachel share’s the story of Benjamin’s birth.

A huge thank you for all your help in the lead up to his birth. Sorry for the delay in writing this but, here’s my birth story…

About half way through my pregnancy I started to feel very anxious about The Birth! I’d binged watched One Born Every Minute and decided I did not want my birth to be as horrific as some I’d seen on there. So, I researched hypnobirthing and decided I wanted a completely unassisted birth without any medical intervention. I practised ‘Mindful Hypnobirthing’ and Nerissa’s pregnancy yoga.

I lost my mucous plug! I hoped labour was imminent, as I was overdue by 3 days and felt very ready to meet our baby.

10am – I heard dripping on the bathroom floor, looked down and my waters had finally broken! Whilst showering, I noticed the fluid didn’t look right. It was cloudy with steaks of green. I feared meconium was present. I called the hospital and was advised to come in straight away.

12pm – I arrived at LRI.  On examination, I was already 1-2cm dilated but was not yet experiencing contractions. A speculum examination confirmed meconium in my waters. I was told I would need to be induced ASAP, as the baby could be in distress.

I was so upset. All my hopes for a totally natural birth evaporated. I stressed to the doctor and midwives that I did not wish to be confined to a bed. I wanted to use the movement and breathing techniques I’d been practising for weeks.

They explained I would need to be attached to a drip and connected to monitors, meaning any movement would be very restricted. They were so understanding though and agreed I could move around as much as possible by the side of the bed, even though this would make life much more difficult for them, as they would need to move with me to keep track of the baby’s heart rate. 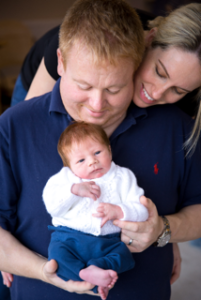 3pm – The cannula for the induction was placed.

5pm – I was transferred to delivery suite and the syntocinon drip (induction) was initiated.

7pm – Contractions began. At this point they felt like waves of energy moving through me and there was plenty of space between them. I actually enjoyed the rush feeling they gave me. No food was allowed so I rested in bed, lying on my side to try and conserve energy before labour intensified.

9pm – Contractions stepped up a gear. The hypnobirthing and Nerissa’s yoga tracks were playing on loop in the background, “This is youuurrrr birth…each contraction will end…”. I used my TENS machine on a very low setting and inhaled lavender oil on a tissue during each contraction wave. The lighting was low.

I could not lie down any more, especially not on my back. It was just far too uncomfortable. I rocked on my birthing ball beside the bed for a while and focused on my breath, “I breath in I relax…I breathe out I let go”.  When the ball became uncomfortable, I stood, using the side of the bed for support whilst I swayed back and forth and round and round.

10pm – I started to feel very shaky and shivery. It felt like a sugar low so my husband fetched me a sugary drink. I immediately vomited. I’ve since learned that the oxytocin hormone can cause this. My cervix was now 4cm dilated.

12am – Contractions became more intense with less space to recover between them. I cranked up the TENS machine and was more and more vocal with my exhalations. My husband had to remind me a couple of times to keep the sounds low. I hummed and ha’d a lot!

1am – I started to feel very tired and doubted myself being able to continue without any help. I felt like a needed to poo really badly so the midwife brought me a bed pan but it just wouldn’t come. I begged her to examine me, as I felt the urge to push. To my absolute relief she was surprised to say I was fully dilated! This was just what I needed to hear and I regained my energy and focus. I since recognised that I was in transition.

2am – My midwife was struggling to keep track of the foetal heart rate. She wasn’t sure if it kept dropping because the baby was in distress or if all my movements meant she just lost contact with it.

She insisted she would direct me with pushing as she wanted the baby out quickly. I agreed. I leant over the side of the bed and after about 4 or 5 deep, powerful roars out came the head – and a hand! I never expected I would give birth standing up but this is just what my body wanted me to do.  One more push and the baby popped out and was handed to me at 2.36am. In all the excitement, I almost tripped over the umbilical cord which was hanging down like a skipping rope. My beautiful baby boy was finally here and in my arms.

Even though my birth didn’t go as planned, I still felt I had an amazing birth experience. I needed no pain relief other than TENS. I truly believe that this was down to the hypnosis and yoga techniques I’d learned and also the fact the midwives and doctors were so accommodating to my wishes.

I was offered gas and air for the placenta delivery which I was very grateful for, as I was too exhausted to rely on breathing alone anymore! I needed stiches for the 2nd degree tears due to him coming out like superman (compound presentation) and the hurried pushing.

Then Ben was given back to me and he latched on to my breast straight away. What an incredible feeling!