Deprecated: is_ajax is deprecated since version 6.1.0! Use wp_doing_ajax instead. in /homepages/36/d820285255/htdocs/wp-includes/functions.php on line 5211
 The birth of Amelia Grace - Mindful Mamma Hypnobirthing 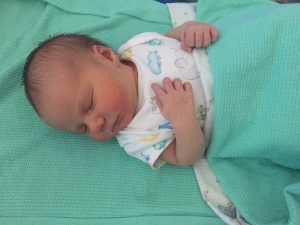 I just want to say that I was told about hypno birthing by my sister in law who practised it for both of her children and they are both really good sleepers and so I thought if that could be the route to a peaceful nights sleep then I was willing to give it a go!

My husband and I attended the course probably just under half way through my pregnancy and I then tried to listen to the downloads about three or four times a week and more towards the end of the pregnancy as this really helped me to relax.

My labour started on Monday 14th March which was a week past my due date. My surges were coming on a regular basis for about five hours and I was listening to the tracks in the hospital room and really in my birth zone but then they slowed right down until we got to a point where they suggested I either went home or onto a ward. I didn’t want  to be sat on a ward when I could go back home and relax in my own surroundings, so this is what we chose to do.

My surges then started on a more regular basis about 10pm and we called the hospital about midnight, only to find that not only was the hospital that I was meant to going back to was closed but so too was the other main hospital in the city which meant we had to go to a hospital that was 30 minute drive away! Whilst speaking to one of the coordinators she said that from speaking to me on the phone I seemed quite calm and she just didn’t think I was dealing with the pain very well and thought from speaking to me that I was only about 3cm dilated. My husband then spoke to her and said that I had been practising hypno birthing and that I was saying that I was ready to push so he would like to get me to a hospital all the same!

My husband put the tracks on in the car – much to me telling him not to but this really helped keep me in my zone and really calm and relaxed.

We were welcomed into the most calm and relaxing atmosphere and I was able to use their one and only pool room. They did ask to inspect me and I said at this stage I was happy for them to do so and I was fully dilated!

The midwife we had was amazing and knew all about hypno birthing and completely left my husband and I to it and literally sat at the back of the room and just checked on the babies heartbeat every now and again which I was happy for them to do. She had a junior doctor with her and she informed him of what the NICE guidelines were but what they were going to do differently because of us practising hypno birthing. Amelia Grace was born at 5.30am with me only having had 4 paracetamol and 2 codeine, a tens machine for when I was out of the water for my surges and then the water for the majority of the labour.

The hypno birthing practise that I did meant that I was fully in control of the birth that I wanted to have and made it a very calm and dare I say it, pleasant experience!

Thank you so much for giving me the chance to use this amazing technique to bring the best out in me and to have safely brought our daughter into the world- and best of all- so far, she is a great sleeper!!