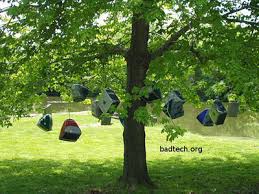 Imagine an apple tree, rich with fruit. There is one particular apple you need to get down, it looks red and juicy and ripe. You really want that apple and you want it now.

You’ve waited through winter, seen the blossom in the spring and now it’s autumn and that apple is so big and round. It looks ready. You get impatient, every day you come out to the tree to see if the apple has fallen but it hasn’t. Eventually one day you decide enough it enough, if that apple doesn’t fall today then there must be something wrong with it. If it stays up there much longer it won’t be as red and round and juicy. You have to give it a helping hand.

So the next day you shake the tree trunk with all your might, but the apple doesn’t budge. In the end you think maybe if I climbed the tree I would get it sooner.

The tree is high, and you realise that if you were to climb the tree you would be tired, it would be hard work, you legs may get scratched and there is no guarantee you would reach it safely or the apple would be easy to pick once there.

So you sit under the tree to contemplate and reflect on your apple. You see the beauty of that apple so perfect in it’s surroundings. You become still and patient under the tree, aware of the peace and quiet in this beautiful place, knowing deep down that the apple will fall from the tree when it is ready.

Then one day while you are quietly clearing the leaves from the grass around the tree the apple falls, right in front of your feet on a soft clump of moss. You bend down and lift it up, it’s perfect without a blemish. You bite into that apple and are amazed at how perfectly sweet it is, that by leaving that apple to fall from the tree when it was time you let it ripen just as nature intended.

This is a symbolic visualization about induction.

The truth is though that inductions are rising – fast. Today Aberdeen University published figures which show that inductions are increasingly and unnecessarily being offered to mothers. Published on the BBC’s website the study found that more than a quarter of cases there was no medical need for induction and that women were offered means of induction when there was no reason indicated. Sadly we also know that induced labours are associated with an increased likelihood of further medical interventions, such as caesarean section.

The researchers said that there did not seem to be a single explanation for the figures. In the study 32% of women had been given some form of induction, which is nearly a third. Do we really believe that a third of women are not able to go into labour naturally of their and the baby’s own accord?

So why is this happening?

If anyone who has been on our classes is reading this they will be familiar with my thoughts on induction, however it still amazes me (and frustrates me) when we have birth reports where mums that are educated and knowledgeable are put under such immense pressure to have inductions. In fact one client recently was booked in for a sweep at 41 weeks when she was only 21 weeks pregnant!

In the UK we use a system called Naegele’s Rule to calculate due dates. Franz Naegele was an obstetrician in the early 1800’s and made his definition of due dates based on the premise that pregnancy lasted ten lunar months from the last menstrual period. It was not based on empirical data.

In the 1980s a researcher named Mittendorf in the US noticed that birth dates for women in his practice, primarily second-generation Irish-Americans, averaged seven days past their “due dates”. He reviewed his records, then went on to review records of 17,000 births, and determined the average healthy, private-care, first time mum averaged 288 days from (last Menstrual Period) LMP to birth: 8 days longer than Naegele’s rule.

Mittendorf and other researchers have further determined several factors that affect gestational term, including ethnicity, nutrition, substance use, mother’s age, and mother’s size. To calculate your due date base don Mittendorf try this:

In a study by Odutayo“Between 4% and 14% (average 10%) of women are prepared to reach 42 weeks gestation, and 2% to 7% (average 4%) to reach 43 weeks gestation depending on the population studied.” (Odutayo) In the overwhelming majority of these pregnancies, the foetus remains healthy, as does the mother.

And, according to American College of Obstetrics and Gynecology (ACOG), 95% of babies born between 42 and 44 weeks are born safely.

There is lots of research over the years which looks at percentages of babies born at 40 weeks, 41 weeks and so forth. An example from a midwife in a unit where they don’t routinely offer induction and delivered 479 babies in a year was:

These figures were from a midwife led unit and are fairly consistent with other research that has been published, apart from the percentage over 43 weeks which is higher in controlled studies.

Impatience is sometimes the only reason for induction – coupled with fear arising from a lack of understanding of how your body works with your baby to bring on labour. Equally mums aren’t aware of how important it is to allow those natural hormones to run their course, to give you a better and easier birth.

The baby will come when it’s ready. When they do it will be wonderful and the birth will be better for it.