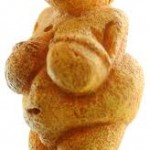 A Potted History of Birth

How we have birthed through time and the history of birth is a fascinating subject and gives a real insight into our different cultures. Over the years there have been many books written, and research done, on the history of birth and on the role of midwives and healers in communities across the world. It’s become a study in itself, crossing disciplines such as religion, anthropology, medicine and women’s studies women’s studies.

Most importantly and sometimes forgotten is that women give life, this is an extraordinary thing.  When we explore the history of birth, we discover that in many cultures women were and still are celebrated as the givers of life.  In early pre-neolithic art early images of ‘venus figures’ have been found; they were traditionally images of large women with childbearing hips, celebrated in drawings on the walls deep within the caves, perhaps where they retreated to birth. They may have been early visual talismans to support a women birthing or to represent fertility. 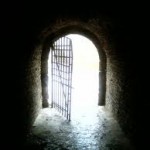 Only now are we beginning to back up the power of visualisation to change physical responses with research;  our ancestors knew what science is only just beginning to tell us.  Visual triggers are very powerful during labour and images either in front of you or pictured in your mind are mirrored in how your body responds.  Speaking to a Brazilian Doula who was reintroducing indigenous birth practices, I learned that the opening flower, or rose image, has been used for hundreds of years in the rainforest of South America as it has across the Atlantic thousands of miles away, in 17th Century France, where a women would have a lit candle by her bed with a Rose of Jericho in some water that would gradually open as labour progressed.   Leaving windows and doors open during labour represents a sense of opening up and spaciousness which corresponds with a woman’s body opening up. These visual symbols seem to be potent images for women birthing everywhere.

The history of birth can be found in Roman Greek texts, which are some of the earliest written records of childbirth.  These show women supporting women during birth just as midwives support women during birth today.  Midwives during those times used very similar techniques to today such as massage and reassurance to support the mother.

Soronus a Greek physician who has written many documents on childbirth, strongly believed that fear and anxiety could cause problems, he instructed midwives on how to reassure a mother. If a mother suffered from  “excessive grief, joy, fear, timidity, lack of energy, anger, or extreme indulgence,” labor and delivery are likely to more difficult.  This tallies with other cultures that believe fear can slow things down and make birth harder than it nature designed it to be. As with visualisation, research now tells us that fear means a woman is at higher risk of intervention.

Fear is not isolated to women in developed countries with high rates of intervention, but also in tribal communities across the world where it is the job of the women accompanying the mother to banish fear and increase her sense of well being in whichever way is common within that culture.

Although there have been mixed views on the role of religion in invoking fear and guilt around birth, early religious texts do refer to women as weak and associated them with wickedness, referring to childbearing as the curse of eve. While I was growing in the 1970’s my grandmother still referred to menstruation as the curse.

However, birth isn’t always a frightening prospect. Indigenous cultures across the world, which do not follow the same religious and patriarchal hierarchy that western history follows, show a very different and more celebratory story around birth where ceremonies were welcomed as part of the ritual of childbirth. Dutchman Adrien Van der Donck described a woman’s preparation for childbirth among the Mohawk and Mahican Indians in what is now known as New York. He wrote that women “depart alone to a secluded place near a brook, or stream of water . . . and prepare a shelter for themselves with mats and coverings, where, provided with provisions necessary for them, they await their delivery without the company or aid of any person. . . . They rarely are sick from child-birth [and] suffer no inconveniences from the same.”

The changing face of birth

During the 14th −17th century, things really began to change; witch hunts swept from Germany across to the UK. Women, the healers and midwives, were labelled witches and were seen to have far too much power. By holding life and death in their hands they were perceived as a political, religious and sexual threat to the church and to the state. Sickness was seen as a punishment from God.  The women, as healers, harmed the church and opposed the wishes of God by healing,  whereas a physician or a priest was considered to have God work through them.

Very often during birth, across the world, songs and incantations were, and still are, used during labour to help a women to focus and to help her find rhythm, and carry her through the birth. In some societies these were looked upon with huge distrust by the churches who saw them as invocations, in fact a midwifes oath after 1567 included the promise to withhold from using sorcery or enchantments during labour. 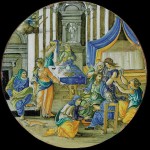 15th Century Majolica from Italy of a birthing chamber

What’s consistent in many cultures though, is that strong sensations are experienced during birth.  Women embraced and welcomed those sensations, only asking for help if it went on a long time or they felt they were struggling.  In these cases they would ask for help, which usually took the form of massage, reassurance and support. Women across all cultures through history do not birth laying down, but throughout time and place women have squatted, stood and moved about.   I have a book on childbirth in Renaissance Italy, where Majolica plates were painted with images of birthing chambers; in these women are always sitting on a birthing chair, never lying down as they do now.

So how is our generation’s history of birth shaping up?

Our birth culture is changing all the time, in some countries we are at a tipping point, moving from normal undisturbed birth into a much higher percentage of medicalised births.  Do we really know what the long-term implications are of this to our society?   Michel Odent says that we are at the bottom of an abyss. We are forgetting that birth is something to be celebrated and that we have birthed for 1,000’s of years successfully, to evolve as we are today. We forget that we are animals, that we are connected to nature and to the earth in ways that are remarkable.  To see a women birthing is a phenomenal and extraordinary thing.  Women are capable of giving birth and having a positive experience if they are supported, loved and cared for with patience and loving compassion; today as they have for thousands of years .

How is the history of birth going to look in 100 years time?  In 200 years time?  Right now we have the power to create a quiet revolution around birth and to take the power back, to celebrate birth, to trust birth and support women birthing everywhere, whether it’s in person or through the internet.

The internet has given women the tools to unite, to support and spread the word about how birth can be, and is able to cross cultural and geographical boundaries. Perhaps this quiet revolution in birth can really change things; perhaps in the future all women will be supported to enjoy and look forward to the experience of birth.  Perhaps women’s determination and motivation to change are the tools that will help climb of the ‘abyss’ and alter the course of the history of birth, leaving a positive legacy for generations to come.