I haven’t really come face to face with the Bounty issue that is circulating the web. I vaguely remember the packs when my son was born but since he was born on Christmas Day, I think I was lucky enough to avoid a visit. The idea of someone I didn’t know, a sales rep, coming into my room to grab personal details for marketing info, hand me a pack of leaflets and take my photo makes me feel deeply uncomfortable.

Yet a birth I was at this year bought me face to face with just how close Bounty have got to the birth. I took this picture of baby’s ankle and wrist bands in labour suite, laid out next to the Bounty card, which on the other side has details of the Bounty photographer coming round. The mother was handed this before she left labour suite with her baby. Should there really be advertising in the room where your baby is born? 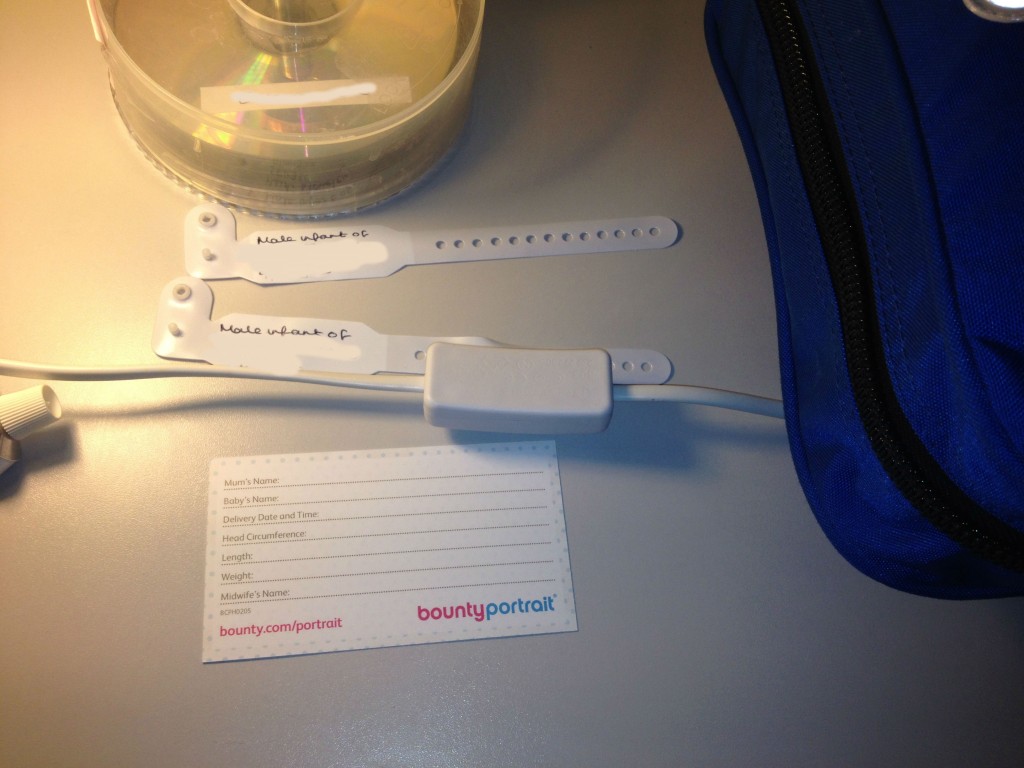 Bounty has even made it into the labour suite now at the point of contact when baby is born.

There’s been a lot of talk recently of Bounty and the intrusion of sales people in those first hours or days in hospital after baby is born.  Mothers have reported being harassed and pressured into sales or portraits, and being co-erced into giving their personal information at a time when they should be allowed a neutral space to focus on their baby and to experience that shift into parenthood uninterrupted.  It’s not ok, to have a sales rep come come to a mothers side in those early hours after birth.

In marketing people talk of ‘watering holes’, the place you go to find your ideal target client.  Maternity units are watering holes for big companies, like Unilever, Forest, Mamas and Papas. Bounty is their way in and the NHS let Bounty in.

Some mums didn’t realise that they were handing over information to a private company for marketing purposes and believed that Bounty is actually part of the NHS.   Other mums have reported Bounty reps visiting them before even family have had a chance or being harassed for life insurance and other products on the phone just a few weeks after their baby is born.

Did you know that Bounty pays the NHS and as it’s often per birth the hospitals are insentivised to promote Bounty. Here is the breakdown of money that the NHS receives from Bounty.   The twist is that Bounty is now being paid £90,000 by HMRC to put the Benefits forms in the packs as they are in contact with the large majority of new mothers.

“It’s hard to refuse now because of the child benefit form that is actually inside the pack”,

“I didn’t get one with DS2 as he was an unplanned home birth and despite asking the MW, she never got round to getting me one.Was a pain as the child benefit applications are in the bags and I had to faff around to get the CB arranged as a result. Much better to get the bag, get the form and post it off.

Some mums love the mini sudocream pots, and that’s ok. This is about choice and respect of personal space – this a minimum that would should expect from our NHS. As a therapist, if I had a rep from a marketing company come and visit them after every session with a little bag of freebies, and a form to capture their details, for my financial reward,  I’d lose my licence to practice – it’s a total breach of confidentiality and malpractice. Just because it happens on a larger scale and by the NHS doesn’t make it ethical.

If you are one of those who thinks that Bounty, as a commercial organisation, should stay off maternity wards, you can visit the petition at change.org to read more about this.