This is the story of Baby Davey’s arrival into the world. His Mum Lydia read ‘Mindful Hypnobirthing’ and used the accompanying tracks to prepare for the birth of Davey – her first baby back in September. Despite being sceptical as to whether or not hypnobirthing would work for a first time Mum, Lydia embraced the techniques and went on to have a positive, calm and confident birth. Here is her story:

The birth of Davey

We used hypnobirthing to prepare for the birth of our first baby back in September and I was staggered at how effective it was! I couldn’t help but notice that many of the examples in Sophie’s book were from second time mums, and my inner cynic wondered whether perhaps it was all a bit coincidental and that they’d just had an easier time second time around. 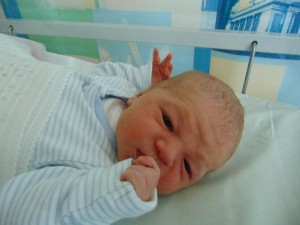 I hope that our story encourages other first time mums-to-be that they can have a positive, calm and confident birth.

I enjoyed using the hypnobirthing tracks in pregnancy to relax and found that, as a Christian, I naturally combined the mindfulness techniques with prayer and the combination of mind, body and spirit was very effective! I was 40 weeks and 4 days pregnant when I woke up at 3.15am needing the loo and realised that I kept getting back pains that seemed to come, peak and go at regular intervals. I was very excited and felt joyful that at last something was happening. I just felt happy! Around 5.30am, I woke my husband, John, and we snuggled on the sofa watching a daft film and used a hot water bottle on my back. By mid-morning, I’d discovered that if I breathed through and had my mind in the right place, the contractions were manageable, but there were a couple where I was unprepared and started to panic and the difference was incredible. Those ones felt awful. But when I focused on my breathing and visualising, each contraction came and went in a totally manageable way. John really helped me with my breathing by repeating some of the phrases and relaxation cues we had practised and by massaging my back through contractions – he must have massaged away for about 14 hours in the end as all the sensations were in my back!

At around 3pm, I went for a bath and we realised that the contractions were getting longer and closer together. I still felt very relaxed and calm. Everything just felt very natural and in control. I visualised each contraction as a three step pyramid that I had to climb up; by the time I reached the top step, it was already fading away. At 4.30pm, we rang the labour suite to give notice that we’d be in later on and the midwife suggested I attach my TENS machine. I had been a bit reluctant to use it, but actually it helped, predominantly as a tool for communicating with John when contractions were starting and stopping – he could just watch me press the button on the machine and I could stay in my birth zone, rather that having to speak to tell him what was happening so he could respond.

At 7.15pm, John wanted to go to the hospital and the idea of getting into a birth pool was very appealing, but the midwife said that it was still too early and that they had no pools free; I think I sounded so calm on the phone that she thought I wasn’t very far along! But I felt OK being at home still and for the next two hours I actually dozed off in between contractions and even when they were coming every two minutes, felt so relaxed that John actually had to persuade me that we really needed to go!

I was dreading the car journey, but it was fine; I was dreading being told that I had only dilated a tiny bit but I was 5cms dilated on admission. To my delight we were given a room in the midwife-led sanctuary birth centre and our lovely midwife, Lauren, started to fill up the birth pool. She was really supportive of our hypnobirthing preferences and soon the room was quiet, full of the smell of aromatherapy oils and with my hypnobirthing music on loop in the background. The pool helped me stay in my zone. I felt calm and supported, able to manage each surge as it came. After about two hours, I felt like I needed to push but said to Lauren, “Surely it’s too early?” She replied, “Don’t doubt yourself – our bodies are amazing!”. I couldn’t believe that I could be at the second stage already so asked for an examination and I was fully dilated – 5cms in two hours with no pain relief! I didn’t even notice the transition phase – and I’d been really worried about that too.

I started pushing and it was hard work. I tried to ‘breathe my baby down’, which helped me relax, but I had to work very hard at this point. Having been very quiet in stage one, I began to vocalise (quite loudly!) as I pushed. I still felt in control, focussed and calm. Lauren was urging me on and John was massaging away through each surge.

Bits of my plug were appearing in the pool but my waters still hadn’t gone. I could feel the membrane bag bulging just in front of the baby’s head. I agreed that we should break it and ended up doing myself! We had hoped that the baby’s head would then be born, but though I was pushing with all my might, he was only moving very slowly. I began to feel sure he would not come out unaided and was going to ask for an episiotomy. I had been dreading needing one, but at the time I felt very calmly sure that it was the right thing to do. John and I were able to pause and pray together; I wasn’t at all panicky or worried. We agreed that I needed to get out of the pool and after trying some other positions for 10-15 minutes, they got me onto the bed and performed the episiotomy – somehow, I had known earlier that I would need one so felt absolutely fine about the intervention. All the way through this last stage, I felt calm, supported and in control. 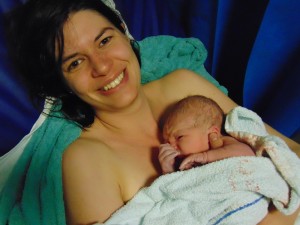 John hugged me as our baby was born in two pushes. Lauren said, “Lydia, open your eyes!” Our darling baby was here!

Our gorgeous son David Joshua weighed 8 pounds and I had birthed him with no pain relief! I genuinely felt calm and confident throughout and my main memory of labour is feeling like I was swimming in oxytocin soup! My husband said, “I didn’t know how strong you were” and neither did I. Baby Davey was completely chilled out through delivery and is now a happy and contented 4 month old. I am so grateful to God for his goodness and to Sophie for her work.