Deprecated: is_ajax is deprecated since version 6.1.0! Use wp_doing_ajax instead. in /homepages/36/d820285255/htdocs/wp-includes/functions.php on line 5211
 Hypnobirthing Helped Me Have the Most Amazing Birth Experience - Mindful Mamma Hypnobirthing

Keri and Dean welcomed their daughter into the world in June and here Keri share’s her story of the birth.

“Giving birth is awful, just take the drugs.” Is what I was told often, unsolicited and in a variety of different ways when I was pregnant. Then when I was asked what prenatal classes I was taking and I revealed that I was taking a hypnobirthing class it was mostly met with polite interest, some genuine from people who were already interested in mindfulness but quite often barely hidden looks of incredulity and eye rolls, I was even asked who would hypnotise me in the hospital? 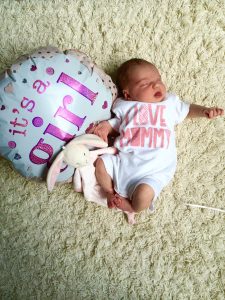 Before I finished work for mat leave I often had really painful stitches in my side when taking a walk on my lunch break. I’m sure there were times when I must have looked like I was in labour as I was rubbing my stomach and trying to casually lean against a lamp post waiting for it to pass. However once I started to visualise dialling down the pain and concentrating on my breathing I was able to continue walking quite comfortably.

The only way I can try to explain it is that it’s like my body knew there was a really strong sensation going on but no longer recognised it as ‘pain’ so just ignored it, this gave me a lot of confidence in the lead up to the birth.

Our baby was born at 18:42 on a Saturday in June but I knew I was going into labour the day before at 05:00, I wasn’t nervous just quite excited and started monitoring the contractions and listening to the affirmations.

When I arrived at the midwife led birthing centre at Leicester Royal Infirmary on the Saturday morning I gave the midwife my notes and preferences which explained I was taking a hypnobirthing approach and what support I would prefer. Which was as little monitoring as possible, limited chatter and not to offer pain relief unless I specifically asked for it.

The midwives were fantastic, they didn’t question it, just accepted it and let me get on with things. I have to say at this point that my boyfriend Dean was my birth partner and he was also an amazing support. I know he had some doubts about hypnobirthing, I’m sure partly due to what he’d been told about labour by those with children and partly nervousness of the unknown. But he knew what support I expected and was unwavering the whole way through. 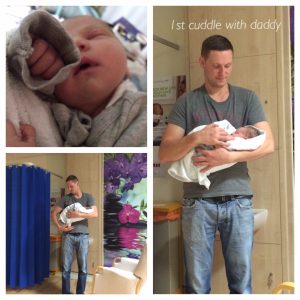 In the birth centre Dean made sure I walked around as much as possible, I’d have been quite happy sitting on the birthing ball but walking around kept labour going at a quick pace. He encouraged me to put my headphones in while listening to the affirmations in order to stay focused and applied pressure to my lower back whenever I was having a contraction.

Later in the afternoon I was told it was time to get in the birthing pool, the contractions had been concentrated down my back and the water really helped ease the sensations. Throughout labour I found I could come in and out of my mindful zone quite easily, I could talk to Dean when I needed to and ask questions to our midwife as I found I preferred to know how I was progressing on the occasions I was assessed. Our midwife was quietly encouraging and really made feel that me and the baby were in safe hands.

Once in the birthing pool, the lights were dimmed and I had my relaxation music on, I remember looking up at one point to see where everyone was (another midwife had come in at this point should her assistance be needed) and wondered why no one was speaking and remembered it was what I’d asked for, this for some reason made me laugh and I found myself thinking don’t laugh, be serious everyone is here waiting for you to have a baby. I later found out our midwife had been regularly whispering updates to Dean, letting him know delivery was close.

Since labour began through to delivery, I took three paracetamol, although there were definitely times I felt it was hard going, it just never felt like I needed anything stronger. Dean knew when I needed a back rub and put a heat patch on my lower back to help with the back ache but other than that, much like during my lunch time walks it was like I could feel waves of very strong sensations but they just didn’t register as anything to worry about or the need to medicate for. 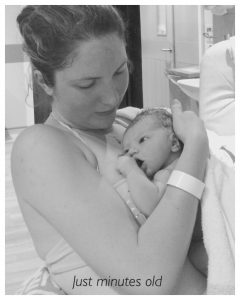 Within about 3-4 pushes our daughter was born, she came up through the water towards me and I all I could think was “this looks a bit odd”, not exactly the overwhelming recognition of perfection feeling I was expecting. The midwife told me shortly afterwards it was because she was born in her amniotic sac or caul which something she’d only seen once before and which Google tells me occurs in fewer than 1 in 80,000 births so maybe it was perfection after all.

The sac was quickly broken as our midwives had seen that the cord was double wrapped quite tightly under our daughters chin, I held her as they had removed it, something that must have only taken seconds but was a time that seemed to last infinitely longer.

Being the first hands she felt touch her newborn skin, and to be the first person she saw when she opened her eyes briefly to try and make sense of her new world is a privilege that overwhelms me with love and complete honour.

I chose to use the birth centre at the hospital because I was aiming for a quite low intervention labour with hopefully as little use of pain relief as possible. I wasn’t trying to be a martyr or hoping for a medal, I just wanted to do my best unaided while knowing that all the benefits of modern medicine were only a corridor away should we need them.

It turned out to be the best decision I made because after aiming for a physiological 3rd stage while our daughter took her first feed, then trying to encourage the delivery of the placenta with a dose of syntocinon and then another direct into the cord while a doctor pummelled my stomach (not too pleasant and not something gas and air did anything to help with) It was accepted that I had a retained placenta.

This meant that having gone through labour without the need for pain relief, I was now having gas and air and a full epidural but that’s just the way somethings go and fortunately didn’t affect the first couple of hours of our daughters life when myself and Dean were the only two people to hold her, ours were the only arms she was cradled in and the delivery room was our haven. At this point though it was changed to a brightly lit space allowing the anaesthetist and surgeons to swing into action, the fact that they were only a corridor away is something I will always be thankful for.

Hypnobirthing is something I recommend to every woman I know, the empowerment I still feel is not easy to explain but I know it ensured my labour and delivery experience was as stress free and dare I say it enjoyable as anyone could wish for.