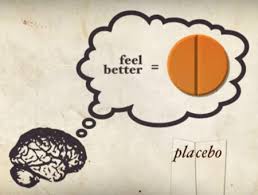 Did anyone see Horizon on BBC 2 last Monday, the 17th February?  It’s still on iplayer so I urge you to watch if it you can.  The headline is Placebo, but it’s much more than that, it teaches us about the power of suggestion.  Something us hypnotherapists have known about for years.

A placebo is a suggestion. You are told something will make you better, so you believe that you are being offered a drug or vitamins that will improve your situation in some way.  There is overwhelming evidence that demonstrates, in different ways, how when you think you are getting better, improving physical performance, reducing pain with an intervention, or even taking a drug you know to be a placebo, your body makes actual physical changes in line with the suggestion of what that placebo is meant to do.

The chemistry in your brain changes, just because of how you think!

This means that if I were to give you a drug and tell you that it would get rid of morning sickness, but it was in fact a capsule filled with cornflour, you would more than likely see an improvement in your morning sickness.  This is not to say that you aren’t experiencing morning sickness and it’s all in your mind, what it shows is that if you are experiencing it your brain is able to make adjustments to the chemistry in your body that reduce that feeling of nausea.

Even more interesting is the power of ‘nocebo’. If I were running a randomised drug trail I would have to tell you about the side effects of the drug you were receiving even if you were receiving the placebo. Research shows that this suggestion also causes chemical changes in the brain, and that people receiving a placebo experience the side effects of the real drug.  You can read a lot more about this in Prof Irving Kirsch’s book ”The Emperor’s New Drugs”.  Kirsch used Freedom of Information to extract trials from drug companies that hadn’t been published and he dissected them, particularly in relation to antidepressants. This was the book that really helped me get to grips with the extent to which the effects of placebo were understood but hidden from us.

The programme also talked about the role of expectation in the experience of pain. If I were to tell you that something is painful, you will be more likely to experience pain even if there is none.  Evidence now also shows that how we think about pain, actually can overpower strong opiate drugs such as remifentanyl, which in some hospitals is offered through an iv in labour.  When receiving a positive suggestion, the front part of the brain becomes more active.  As an area associated with endogenous pain modulatory system, including the anterior cingulate cortex, which releases dopamine and your body’s own natural opoids.  If you are given a negative suggestion of pain or of side effects, it activates the area of your brain more associated anxiety and the increased levels of pain, the hippocampus, in particular the amygdala.  You can read more about expectation and pain here.

Pretty amazing, I think. So how does this type of suggestion relate to birth?  A great deal and sadly it’s completely under explored, trials that are set up rarely take account of the nature of hypnosis, suggestion and the subtleties of how it works, but I’ll talk about that in another blog.

First of all if you are told to expect pain, you are likely to trigger activity in the hippocampus and amygdala during birth, the part of your brain associated with anxiety and increased levels of pain. This is also known as your limbic system.

On the other hand, imagine that you have been given the positive suggestion by your doctor or midwife that birth is completely normal, that it’s perfectly manageable; perhaps  society around you told you it was just an intense pressure and it didn’t last long.  Or you were given a drug during labour and told it was an epidural, even though it wasn’t, what would happen?  I know anesthetists that have said on siting an epidural, but not administering it, women say, “oh that’s so much better, oh that’s wonderful thank you”.  I know many midwives who agree that women ring or come in complaining of stomach upset; when they are examined and told they are in active labour, their pain suddenly goes through the roof, ‘they can’t cope’ or ‘they need and epidural’.

Placebos, have given us insight into the profound changes our beliefs and expectations can make in the chemistry of our brain. Hypnosis is a vehicle where we can ethically use the power of suggestion with the full knowledge of our clients.

Preparing for birth using hypnosis, makes absolute sense, it is based on genuine contemporary research around expectation, belief and the extraordinary power of our minds to alter our experience in each and every moment.

You can read more about the power of suggestion, placebo and pain in my book ‘Mindful Hypnobirthing’ and by attending one of our Mindful Mamma classes, which show you how you can use hypnosis to create a positive experience of birth.

Previous Post: « The Birth of Penelope Rose
Next Post: Hypnobirthing may be calm, but it is not always quiet. »


Notice: Trying to access array offset on value of type bool in /homepages/36/d820285255/htdocs/wp-content/plugins/wishlist-member/legacy/lib/integration.shoppingcart.twoco-api.init.php on line 183

Notice: Trying to access array offset on value of type bool in /homepages/36/d820285255/htdocs/wp-content/plugins/wishlist-member/legacy/lib/integration.shoppingcart.twoco-api.init.php on line 184

Notice: Trying to access array offset on value of type bool in /homepages/36/d820285255/htdocs/wp-content/plugins/wishlist-member/legacy/lib/integration.shoppingcart.twoco-api.init.php on line 185