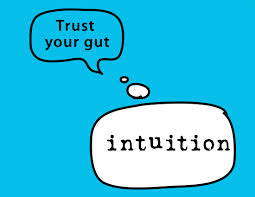 Your intuition knows how to birth.

Trusting your birth intuition can make all the difference.

I wanted to talk to you about birth intuition today, as it is so important with birth.  One of my mantras is ‘trust your intuition’, but it’s a bit of a floppy suggestion, what does that actually mean?  What is your birth intuition and how do you listen to it when it’s trying to tell you something?

I was at a birth recently, a super fast, second birth with no drugs at all, a baby girl who was a little over 8.5 lbs with a physiological third stage and no nicks or tears.  The look on the mothers face afterwards – it was awesome.  For her it was a completely different experience to her first birth when labour was hurried along by breaking her waters, which lead to an epidural, episiotomy and forceps delivery.  After her first birth, she was so shaky she couldn’t hold her baby.

What a difference!  But it wasn’t just because she was a second mum, true, she prepared well with hypnosis for birth but she also listened to her birth intuition this time and didn’t try and tick the labour checklist off with every little niggle or set of Braxton Hicks, falling into the trap of thinking labour had started while her body was still just warming up.   She didn’t go to the hospital too early and she listened to what her body was telling her to do.

It was an interesting birth, my head told me that she would be early, for certain reasons, but I didn’t feel it. I was in no hurry to pack my back, and the birth somehow felt distant to me.  I didn’t get many texts from the mum, as she was so busy with other things.  Then the Thursday before the birth, at 40+3 I packed my bag. I didn’t even think about it, I suddenly stopped myself and thought “Hmmm why have I done that?” This commonly happens, somehow I know when to pack a bag.

Then on Friday I cancelled a tennis match that I really wanted to play in. It would have taken me 1.5 hours  away from my client, and although I’d played a match on the Thursday, this time is was different; it didn’t feel right, like a hint of pressure in my chest when I thought about going.  I even had a vivid dream that night, that her labour was so quick they wouldn’t have time to fill the pool!

Sure enough Saturday afternoon I got a text saying that she was going to call her mother in law, for ‘a bit of security’ to look after her other child. I knew then that this baby was coming, even though she wasn’t in labour.   She wrote, “nothing is happening, thought it was the start in the morning, but they must have been Braxton hicks contractions as they stopped”.   She reflected afterwards that if this were her first birth, she would have probably gone to the hospital at that point.

Then in the evening I got a message saying things had started and that she was fine, then later in the evening, I got a very laid back text saying things were moving along they were 5 minutes apart and lasting 1min30 seconds. I just knew, rang and asked if she wanted me there, so she said “I think you should come over but don’t hurry” (when a very laid back second time mum says this, in a spaced out way, I hurry!).

Sure enough she was at home with her music on, just rocking with the contractions and quietly breathing through them.   The dad wanted to go in, but I reassured him that she’d know when to go in. If she’s asking “is it time to go in” or it’s your suggestion as a birth partner, it’s too early.  After the next contraction had passed she said, “no I’ll wait a bit”, then the next contraction came  and she said “now it’s time”;  in the space of 10 minutes it was time to go.  Afterwards she said they were just different, and she just felt it was time to go, her birth intuition had kicked in.

Once we arrived in labour suite they were down to 3 minutes apart, after a quick exam she was 6/7 cms dilated, shortly after that her waters broke.  Her baby was born just 30minutes later, after she quietly gave one little push to little to bring babies head into the world.   No guided pushing or straining, her little girl slid her head and shoulders out, had a good look around and then the rest of her followed very quickly.  Within 10 mins baby was latched on, followed by the placenta.

For me this birth was all about ‘just knowing’ when things were starting, “just knowing’ the right time to go into hospital or call the midwives. This mum had listening to her Mindful Mamma mp3s every day, but had also been busy with a toddler and many other happy distractions in her life, so she hadn’t pounced on those early warm up contractions, instead trusting her that birth intuition.   It also interested me how more and more, I just ‘know’ too. My bag is always packed at the right time, I always have childcare in place, and well, you know, whatever you believe, that dream was true!

Just the difference between two contractions was enough to make the choice to go the hospital. Prepare so you are relaxed and trusting in birth, let go of your fear using hypnosis if you can.  When you get near to your date see those niggles and on off contractions as warm ups, stop starting maybe until your body just clicks into the rhythm of labour.  Stop thinking about it, switch your focus to something else that can absorb you, don’t intellectualise. Trust you will know, here is a checklist:

Listening to your birth intuition:

Signs to go in hospital or call the midwife in a normal birth;