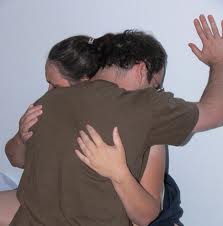 Men around birth, is this ok, and does it help or hinder?

This is a thinking out loud blog about something that has been bothering me since I attended the Paramana Doula training with Michel Odent about men around birth . The information from the day has settled and has started to trickle down into my practice. As the information took root I found myself questioning one of my firmest beliefs, that if a man was prepared and knew what to expect at the birth he was probably one of the best people so support his partner.  However, I found myself returning to Odent’s well-debated view more and more that a man should not be at a birth as he upsets the natural course of events.

Now anyone who knows me and knows the class, knows that I agree and disagree. I think that if the birthing partner is male, he wants to be there, his partner wants to be there and is prepared that he is probably the right person for the job. If  he doesn’t want to be there he shouldn’t.  Our classes have a big section on building confidence of men at birth, and the role of men at births and we get great feedback because of this.

Curiously over the past few weeks I’ve been much more alert to fathers and their reactions to birth and their emotions in influencing their partner’s choices around birth.  What I’ve sensed has begun to change my view and although I’m not firmly in Odent’s camp, I’m much closer to it.

The first image that really struck me was a clip on One Born Every Minute where the mum had a doula to support her and her husband. And boy I’m glad she did have a doula. The husband was of Turkish origin, men around birth isn’t culturally accepted, it’s a woman’s domain and the men stay well away. His discomfort at having to be there seemed apparent, he found it difficult to stay in the room, but thankfully because he had a doula, he was able to leave without feeling he was abandoning his wife.   Even at the end as baby was being born, the midwife called him to watch his baby emerging into the world, he declined – three times – before he was virtually dragged from where he stood, near the mother’s head, to watch baby being born.

We know that men at birth have choices too. They can choose not be there, or they can choose to be there and that choice should be respected too. They should be free to make this choice, without influence from mother, midwife or even cultural expectations.

The following week on a class I must have been subconsciously observing male reactions, some obviously felt uncomfortable watching the beautiful hypnobirth we show.  Then in an exercise I traditionally get the class to do together, I instinctively separated the men and the women to see how they responded to different environments in labour in relation to oxytocin and adrenaline – the birth hormones. I wanted to explore more closely how men around birth are hormonly influenced by their environment. Usually when we do it as a group there is majority oxytocin in the home, and majority adrenaline in hospital, but it’s always a little mixed.   The exercise aims to demonstrate where oxytocin, our labour hormone, is naturally switched on, with the familiar and the comfortable. We then teach how to make a hospital environment more oxytocin rich if that’s where you’ve chosen to go.

When I separated the groups I found that at home it was 100% oxytocin in the home for women and nearly all adrenaline for men.  The opposite happened in the hospital environment and the car, the men felt safe in control and principally oxytocin rich, whereas the women were adrenaline rich.

This made me feel uncomfortable as although I probably always knew it, the penny really started to drop and I became more consciously aware of how male partners may be influencing where women were birthing as much as the patriarchal medical system was often deciding how.

Despite the fact that they had their partner’s best interests at heart and that they wanted to protect and support their partners, they were governed by fear and their instinct was often to be in the hospital in order to protect. The mother’s instinct is often to be at home.   It may also be that the fear of the mother giving birth at home or in the car, meant, quite literally, that their partners, were often driving women into hospital too early.  We know that one of the best ways to avoid intervention is not to go into hospital too early.

I too am in the very difficult position of knowing instinctively that I would want to birth at home if I were to have any more children.  The decision was taken out of my hands with my first and my second, which was a VBAC at 32 weeks, I chose to be in hospital. But if we were to have a third despite me instinctively wanting a homebirth my choice would again to be to go into hospital, not because I want to, but because I know that my husband would be so consumed with fear that his anxiety would be contagious – so I would compromise.

This week I asked myself “why should I have to compromise?”.  As far as I am concerned the best thing for me would be to birth at home. I am the one birthing.   And suddenly I felt angry at myself for being subservient to this cultural shift of partners having to be there and frustrated that men seemed to be indirectly pushing their partners into hospital.  This quickly turned to softened to sadness that this is an unspoken and uncomfortable situation, often for men and women and I felt real empathy for both.  Men don’t want to be there all the time although society suggests that they should be, but is it really better that they are not?  Equally if a woman instinctively doesn’t want her partner there, how can she say to the person she loves “I don’t want you there”, if he does want to be there?

Setting aside their judgment and going with the birth as it is can be difficult for some men.  Very often they automatically assume their partner is in unmanageable pain and that she has to be rescued from if she makes screams, rants or groans that seem out of character.   They may feel edgy, may pace up and down (inside the room rather than outside!), feel at a loose end, try and talk her out of it, glance helplessly at the midwife.

Sometimes if I’m working privately with a client I’ll show a video of quite a powerful birth where a woman makes noise, facial gestures, is vocal and writhing in the water.  Then I say to the dad, “what did you think of that?” their response is, “she’s in so much pain”, it’s then I tell them that it’s an organismic birth.  We must learn not to judge and to impose our own fears on how we perceive a partners birth.

So all of this leaves me questioning the shift in my own thinking about men around birth.  I know that there are a great deal of men that will be and have been a real pillar of strength and security at the birth, able to set their own fears aside, recognize that their state of mind can also play a role, learning to be calm, mindful and present.   Ultimately I don’t know what I would have done without my husband at the birth, I felt I could totally rely on him on the day.

What can a birthing partner do? Listening to what the mum-to-be instinctively wants to do is so important. Yes, it’s your baby, yes it can be a shared experience, but how she feels will impact the type of birth she has and in turn how it affects your baby. If she feels frightened of going into hospital and you are frightened of being at home, what should a partner do?  If the mother feels it’s too early to go to hospital, but you are getting edgy what should you do? Can a partner find a way of facing his own fears and coming to terms with them prior to the birth? What would help him do that?  Or should he not be there at all?

Answers mammas! I’d be interested to hear people comments on this.


Notice: Trying to access array offset on value of type bool in /homepages/36/d820285255/htdocs/wp-content/plugins/wishlist-member/legacy/lib/integration.shoppingcart.twoco-api.init.php on line 183

Notice: Trying to access array offset on value of type bool in /homepages/36/d820285255/htdocs/wp-content/plugins/wishlist-member/legacy/lib/integration.shoppingcart.twoco-api.init.php on line 184

Notice: Trying to access array offset on value of type bool in /homepages/36/d820285255/htdocs/wp-content/plugins/wishlist-member/legacy/lib/integration.shoppingcart.twoco-api.init.php on line 185