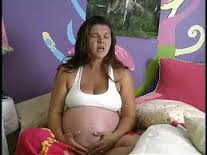 Today Heatworld had a headline that shouted “Forget drugs, Kimberley Walsh is going to sing her baby out’.  You know what, this is a great idea, many women throughout time have sung to their babies from the moment of conception, through pregnancy, during labour women sing to and with the woman birthing. Whether you can actually sing or, like me, are more prone to caterwauling, there are reasons why singing is so fabulous for birth.

1. First of all the baby is often soothed by the singing. If a mother loves her singing and is usually relaxed and comfortable when she is singing, the  baby will associate the cadences of their mothers singing voice with feeling good. Those feel good hormones that we release when we are doing something we enjoy, cross the placenta, and baby benefits from them too. This association can last for years, and can soothe and calm a baby to sleep  well after the birth. I sang the same song to my song throughout my pregnancy and aged 10 it still soothes him and makes him sleepy. When we teach hypnosis, the background music to the tracks listened to through pregnancy is often used my mums for years afterwards to settle their babies. Magic!

2. The breathing that Kimberley Walsh will be using during her singing lessons will  be deep belly breathing. In yoga or hypnosis the same breath is taught, this deep breathing encourages the mother to relax and the muscles in the uterus to respond well to labour. Deep breathing can take a mother into a comfortable birth zone where she can focus and be in the present  moment.  Many women say that if they have prepared well and have a good rhythm with their breathing it’s all they needed to keep them focussed and in their birthing zone during labour.

3. The sound itself, and the vibration of of sound may affect the cervix. There is some work that suggests vocal sound stimulates certain parts of the body: every sound made by a person is able to hit one of his/her vertebrae and the stimulate the nervous system and the nerves which branch off to one or more internal organs. Therefore, according to the depth and intensity of the sounds produced, the body makes a specific part of it vibrate.

Notes that activate certain points on the spine stimulate the cervical area.  When I was a doula I supported a woman who was a singer and  musician, through her labour she would alter her notes, some high some low, throughout her contraction. Afterwards she said that this was entirely instinctive, I’ve heard other  midwives and doulas comment on this as well. People who don’t want to sing, often use other sounds, like low mooing through each contraction as birth gets closer. It has the same benefit, of pushing the energy of contractions down to help your baby out.

When I was a doula I supported a woman who was a singer and  musician, through her labour she would alter her notes, some high some low throughout her contraction. Afterwards she said that this was entirely instinctive, I’ve heard other  midwives and doulas comment on this as well. People who don’t want to sing, often use other sounds, like low mooing through each contraction as birth gets closer. It has the same benefit, of  pushing down rather than out on the uterus.  Try it now, mooing/humming = relaxed jaw and relaxed cervix, uncontrolled screaming = tension. Shifts in vocal sounds from big too low are what will often alert your midwife that things are changing and your baby may be here soon.

4. There is some research to show that use of vocal cords during labour can also reduce labour pain.  The idea behind this is that singing is a type of  hypnotic induction and sedation. Researchers suggest that singing releases endorphins which release your body’s own natural painkillers. This can be the case if a woman sings herself, or is sung to. Historically midwives and women supporting a labouring mother have sung to her, supported her through sound, soothing her, making her feel supported cherished and loved.

Watch this video and see if you can spot the two strong contractions this  mother experiences while singing during labour. As you watch notice how relaxed her jaw and her shoulders are.

So what does Kimberley Walsh need to do on the day? Simply get into a comfortable rhythm with her breathing, keep the breath deep in her belly, her jaw relaxed and sing her baby out.

Previous Post: « Placebo, the power of suggestion and birth
Next Post: How do I know that my hypnobirthing practise is working? »