Deprecated: is_ajax is deprecated since version 6.1.0! Use wp_doing_ajax instead. in /homepages/36/d820285255/htdocs/wp-includes/functions.php on line 5211
 Would I have a pain free labour if I didn't know I was pregnant? 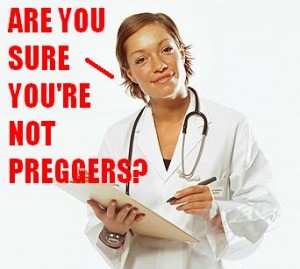 Can you really have a pain free labour?

Many years ago I met a friend of my husband who was 24 and had a 10 year old daughter. The story goes that her mum phoned her dad in the pub and asked him to come home because Anna was having a baby. He replied “I’ll finish my pint and I’ll come home and we’ll sit down and discuss what we are going to do”. Then her mother shouted “ now, she’s having the baby now”.  Anna gave birth to her little girl within the next couple of hours, with little more than a bit of stomach ache and sitting on the loo. So apart from thinking she had a bit of an upset tummy, she was fine. I thought “how on earth could someone be pregnant and not know and is that what you would call a pain free labour?”.

When I became pregnant I was in very good shape, it was just after I got married and had spent months toning and exercising to squeeze into my dress.  Throughout my pregnancy I had intermittent bleeding, I had no morning sickness at all, and I didn’t show until very late on in my pregnancy. In fact I recall at 24 weeks, putting on my new Isabella Oliver trousers on the tightest setting to go to work and then proudly sticking my tiny rounded tummy out. When I did go into labour early my ‘tiny bump’ was commented on.  I’m sure if I had been on birth control and not  planning a family that being pregnant would have been the last thing I’d have thought of.  In my years of teaching I have seen women with very very small bumps, and women with huge bumps. Conversely a friend of mine who definitely isn’t pregnant has IBS and is always complaining she looks pregnant, another has fibroids and her abdomen can get quite swollen.

I can see how possible it could be years before pregnancy tests, or even today if you are taking precautions that have failed. It’s rare but it happens.  When researching this, I stumbled across a show that is running in the US called “I didn’t know I was pregnant”. If you want to see it, google it, it’s full of Discovery Health drama so I won’t post it, but you can read this very funny critique of it here.  How could I have not known about this show!

What really interested me is how women who don’t know they are pregnant experience having a baby, do they have what would be considered a pain free labour?   There are many antenatal classes today that focus on the aspect of fear and expectation; the ideology that when we are pregnant, we become anxious of labour which creates physical tension, which in turn make birth much more painful than nature intended it to be. Some hypnobirthing models avoid the word pain altogether and say birth isn’t meant to be painful. It’s certainly true that expectation of pain, whatever that pain is, increases our perception of the intensity of that pain.  Prof Irene Tracey at Cambridge University has undertaken some significant work on expectations of pain and in a recent study examined how manipulating participants’ expectations of pain can influence their response to an active drug. So in theory if you aren’t expecting to give birth, you don’t have the same level of expectation could you have a pain free labour.

A study published last year by her, showed that volunteer’s experience was influenced not by the drug but whether they were told the drug had or had not been administered. This showed the volunteers really did experience different levels of pain when their expectations were changed, although the administration of pain relief remained constant.

I’ve heard an anesthetist say that he frequently goes to administer a epidural, he may put pressure on the area, insert the needle and ask “how is that”, for the mum to say “oh thank you that’s fantastic such a relief” before he’s actually put the drug in. I heard mums ask if their partner can put the tens machine up, only to get relief before the partner has turned it up.

The power of hypnosis is also undeniably a brilliant pain management tool. Suggestions used during hypnosis distract the mind through disassociation, but also embed the belief that everything is well and fine and that the more they let go the more comfortable they are, and the more comfortable they are the easier it is to let go. Effectively reducing the expectation of pain.  As a hypnotherapist in my general practice, I often work with people who have chronic pain; their pain is constant and yet when they are under hypnosis the pain disappears, and remains much less even after the session has finished.  To read an extreme example of how hypnosis can manage physical sensation and pain read this article by Dr John Butler on his own hernia operation using hypnosis.

As a doula I use deep hypnosis for women, that are in a long latent stage, to get rest. After a short session of hypnosis people generally feel energized so it’s a great way of helping to manage this. Recently a client who had had an epidural with her first birth said that it was amazing and as effective as the epidural, she said during the deep hypnosis she went from having a labour with pain, to it being a pain free labour.

Expectation of pain during labour can create tension, which can create pain. However there is no denying that labour can trigger sensations for some women, sometimes powerful sensations, similar to stomach aches. This can be unexpected for women who are taught that strong sensations aren’t a part of labour.  If we are not prepared for the sensation of labour, our brains then fall back to default position and perceive it as pain, rather as pressure, tightening or aches.

Women who don’t know they are pregnant don’t build up that expectation of pain in labour.  Even if they are in unconscious denial of pregnancy they will avoid reading up, or listening to pregnancy related horror stories.

So I googled for stories, and found that as well as the show in America on the subject, a surprising amount of stories demonstrated consistencies in how women experienced the unexpected birth of a child.

From all the stories I encountered there were consistencies on a number of things, the women complained of a stomach ache or feeling out of sorts, or back ache, but just put it down to other symptoms, went to lie down or managed in the same way they would a headache or flu. If the sensations got troublesome, usually only a short while before their baby was born, they took themselves to A&E. This is likely to be transition and that natural short surge of adrenaline just before baby is born. Without exception they all seemed to have very short labours simply because they treated it as they would a virus or stomach bug until the last moments before the baby was born.

The internet is awash with forums trying to second guess when a woman is going into labour, in many ways we are over educated and women are much more alert to the signs of their body warming up, thereby often assuming labour was longer than it was. For some women attention turns almost obsessively to those small indictors of labour being closer and the mind becomes focussed on every minute change, often exaggerating signs. On the other hand,  it’s not uncommon for very laid back mums to carry on with everyday tasks until they are no longer able and baby’s arrival is imminent.

I’d be really interested to hear your thoughts or stories of finding out you were pregnant very late on in your pregnancy, or anecdotal stories from your parents or grandparents. Especially if you felt you had a pain free labour. I’m sure there are plenty more out there!

Previous Post: « The Power of Love, Birth and Oxytocin
Next Post: How long should a hypnobirthing course be? »